The Impact of the Opiate Crisis on the Dental Industry

Since the mid-1800s, opiates such as morphine have been to used to help control pain for every ailment, from a surgical wound to a minor cough. By 1920, however, medical professionals began to recognize how addictive opiates can become, and dentists became reluctant to prescribe the drug. All of that changed in 1996 when a company called Purdue Pharma introduced a drug called OxyContin to the market. Purdue Pharma set out to gain the business of medical professionals using the campaign “Partners Against Pain,” and hosted dozens of promotional conferences throughout the United States. The company falsely informed dentists that OxyContin was not addictive, that less than one percent of the patients prescribed the drug fall prey to addiction, despite the fact that is an opiate. They also offered incentives to dentists who prescribed the drug to patients. Prescriptions for opiate painkillers began to rise at an alarming rate.

Although Purdue Pharma very publically lost a lawsuit in 2007 due to misleading marketing that OxyContin was non-addictive and had to pay more than $600 million in one of the largest pharmaceutical settlements in history, the damage had been done. According to the Centers for Disease Control and Prevention, by 2012, opiate prescriptions reached an all-time high, with more than 255 million in the United States alone. That means for every 100 Americans, approximately 81 of them have a prescription. While awareness has caused opiate prescriptions to decrease in recent years, as of 2016 there were still almost 215 million, which amounts to 66 individual prescriptions for every 100 Americans.

The problem with these opiate painkillers is that they are highly addictive, which can quickly turn a patient who is following doctors orders into an opiate addict. David Bell, CEO of USA Mobile Drug Testing, explains:

“Even when a patient is following their doctor’s prescription to the letter, they can become addicted to opiates because the longer they take it, the greater tolerance they will build up to the drug, thus requiring a higher dose to achieve the same results. That fact, coupled with the physical and psychological feelings it produces make it especially prone to abuse.”

Because opiates block pain receptors in the brain while triggering the release of endorphins, they can be a good tool for fighting chronic pain, or acute post-surgery pain, such as when a patient has their wisdom teeth removed. However, the body can quickly build up a tolerance to the medicine, which means a higher dosage is needed to feel the same euphoric effect. This can lead to opiate abuse or an addiction. In March of 2018, the American Dental Association adopted an interim policy that would limit opiate painkiller prescriptions to one week. Additionally, in an attempt to protect adolescents from falling prey to such an addictive drug they might not understand, Pennsylvania recently adopted a policy that requires written parental consent for any patient under the age of 18 to be prescribed an opiate.

Dr. Matthew Peterson of Digital Dentistry of Sarasota shares “If a patient doesn’t report drug use, it can be challenging for a dentist to identify their addiction status. It’s essential that all dentists get training in how to recognize the signs of drug abuse and addiction.”

Another frightening fact about opiate use is that it can be a gateway drug into heroin abuse, which is why dentists need to exercise extreme caution when prescribing it. Approximately 75 percent of opiate abusers who began using in the 2000s reported that their first opioid was a prescription drug, and nearly 80 percent of people who use heroin reported that they used prescription opiates prior to trying heroin. Before a dentist prescribes such a powerful painkiller, it is his or her responsibility to assess the medical history of the patient and look for signs of drug addiction.

Because everyone sees the dentist at some point in their lives, an opiate prescription can lead to an addiction problem which in turn affects the entire community. In March 2018 the CDC estimated that opiate misuse and addiction was costing the United States approximately $78.5 billion annually. This is taking into account not just the costs of healthcare and addiction treatment, but also the criminal cases that can arise from the misuse of opiate painkillers as well as the loss of productivity in the workplace. This crisis has become so widespread that even the Department of Transportation has taken steps to update their DOT drug testing regulations to reduce the risk of impaired employees causing workplace accidents.

If an employer suspects that an employee is under the influence of opiates, another type of drug, or alcohol, he or she needs to act immediately. The employee needs to be removed from all work activities while the employer utilizes reasonable suspicion drug testing. This means that the employer or another supervisor has observed the employee acting contrary to the norm and is showing symptoms or drug or alcohol abuse. Some symptoms to watch out for include: anxiety attacks, depression, irritability, euphoria, increased energy, decreased appetite, slurring words, or even loss of consciousness. Unless a drug test is returned with a negative result, the employee should not return to any work activities. This will help ensure an accident or injury does not occur in the workplace, and it will protect the employer from any liability if the employee was impaired.

If an accident, injury, or death has already occurred in the workplace and the employer believes the employee was under the influence or opiates or another drug or alcohol, he or she should immediately utilize post-accident drug testing. This type of testing should be performed as soon as possible after the incident. If the drug testing returns a positive result, it can protect the employer from liability. It can also affect whether or not the employee is eligible for workers’ compensation, should he or she be terminated as a result of the drug testing.

Should a dentist believe that a patient is suffering from the abuse of any drug, including opiates, he or she should suggest a professional treatment center or program. Opiate withdrawal can be a painful process, and a person should never try to go through it alone.

Matthew Boyle, COO of Landmark Recovery explains “Attempting to withdraw from a serious substance dependency is a difficult process. You can significantly reduce the negative side effects and chance of relapse from opiate withdrawal by seeking a certified treatment or detox center.”

Medical professionals trained to treat this type and other types of addiction should be part of the process. A medical professional can guide the addict through the appropriate treatment plan, which may include additional medications, individual or group therapy, and implementing a healthy diet and daily exercise.

If you’re ready for great dental care from a great dental team, contact CK Farr Dentistry in Atascadero, CA. Dr. Farr is eager to help you keep your mouth healthy in a low stress environment. To schedule an appointment, fill out our online form or call us at 805-461-3422.
Schedule Online Now
Click To Call Us 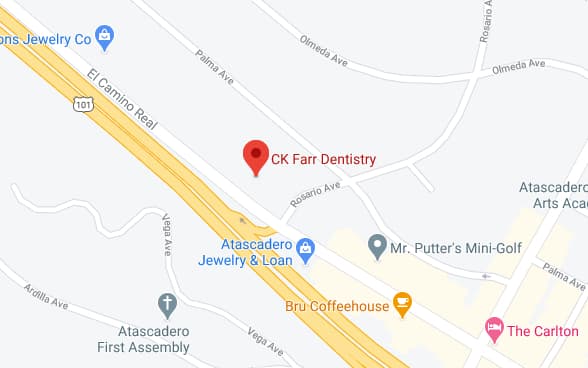